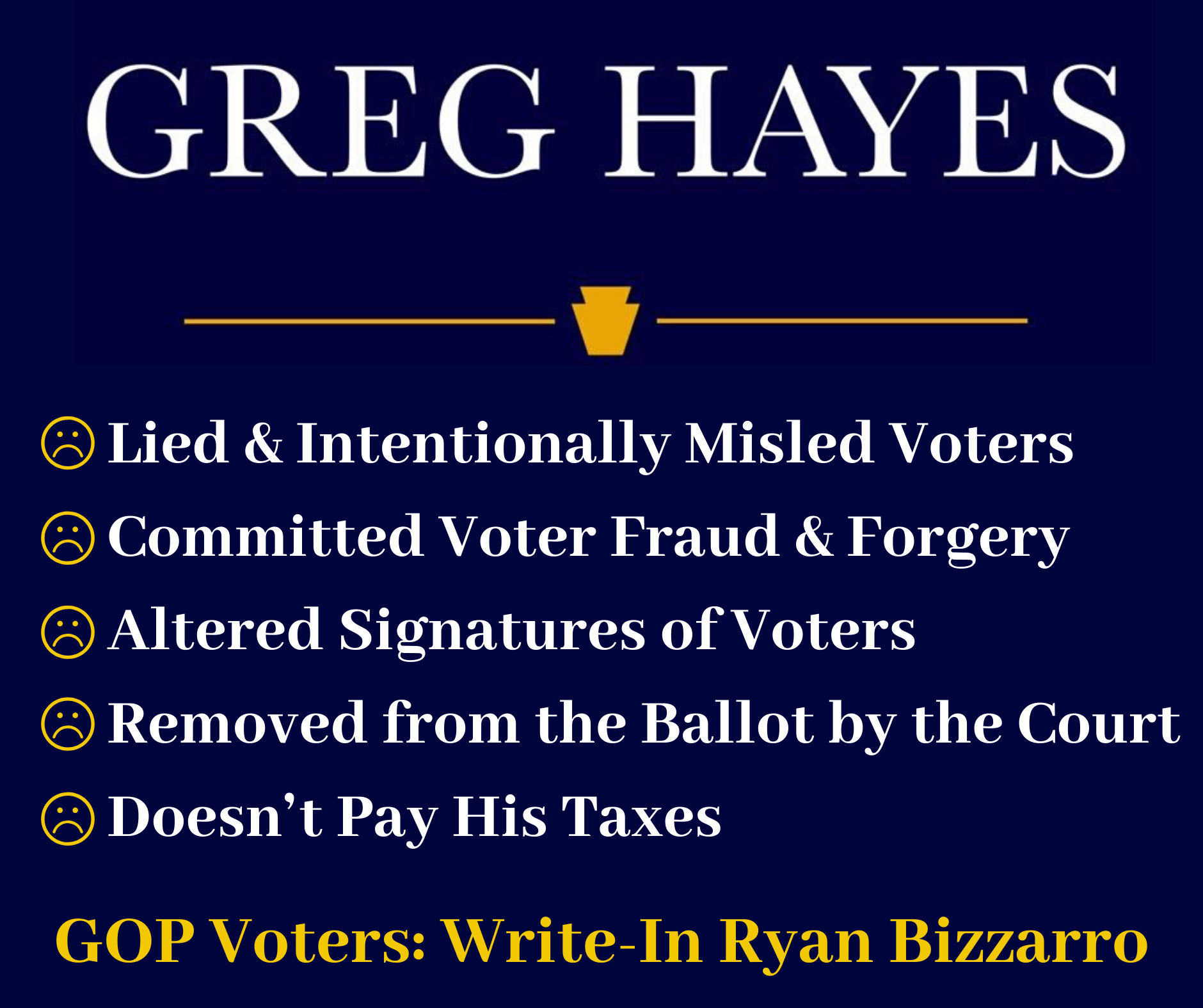 I never mind competition; however, it is outrageous when my competitor completely disregards the process, rules, law and will of the voters in the 3rd Legislative District. They have defrauded YOU in their actions, and are still asking you to reward their bad behavior.

I mind when the competition LIES, CHEATS and FRAUDULENTLY attempts to get on the ballot by committing mass FORGERY. And apparently, so does Republican Commonwealth Court Judge Anne Covey, who ruled that Greg Hayes be removed from the ballot for fraudulently submitting forged and altered signatures.

Gregory S. Hayes and Republican State Committeewoman, Linda Pezzino, were caught committing mass forgery.  Hayes was kicked off the Republican primary ballot by a Republican judge. Their victims included, but are not limited to:

• an infirmed woman and her elderly husband

• Pennsylvania “snowbirds” who are registered to vote in Florida

• a retired police officer, and many more of our friends and neighbors

If they’re going to lie and cheat in order to try and get on the ballot, imagine what they would do if they were successful and had the job?

The “win if you may, lose if you must, but always cheat” mantra seems to be the new norm in some unseemly circles. Unelected activists sitting in smoke-filled back rooms assisted in helping this man fraudulently get on the ballot by forging signatures -- which they admitted & conceded to in a Pennsylvania court of law. I have entirely too much respect for the institution to let a cheater and fraud make it on the ballot without putting up a fight. I take this job, the integrity of our elections, and my dedication to the voters in the 3rd Legislative District very seriously.

Politics aside, I think we can all agree that mass forgery, fraud and cheating is bad for our Constitutional Republic and should NEVER be tolerated.  Even worse, when these activists are caught red-handed like this and still ask you to lend your support, they are asking to lend your credibility to support their bad behavior.

GOP VOTERS, whether at the polls on Tuesday, June 2nd, or on your mail-in ballot, I respectfully ask for your vote. Thank you!

SEE THE OFFICIAL COURT DOCUMENTS, NOMINATING PETITIONS, SIGNED AFFIDAVITS FROM THE VICTIMS AND THE ENTIRE COURT TRANSCRIPT BELOW. 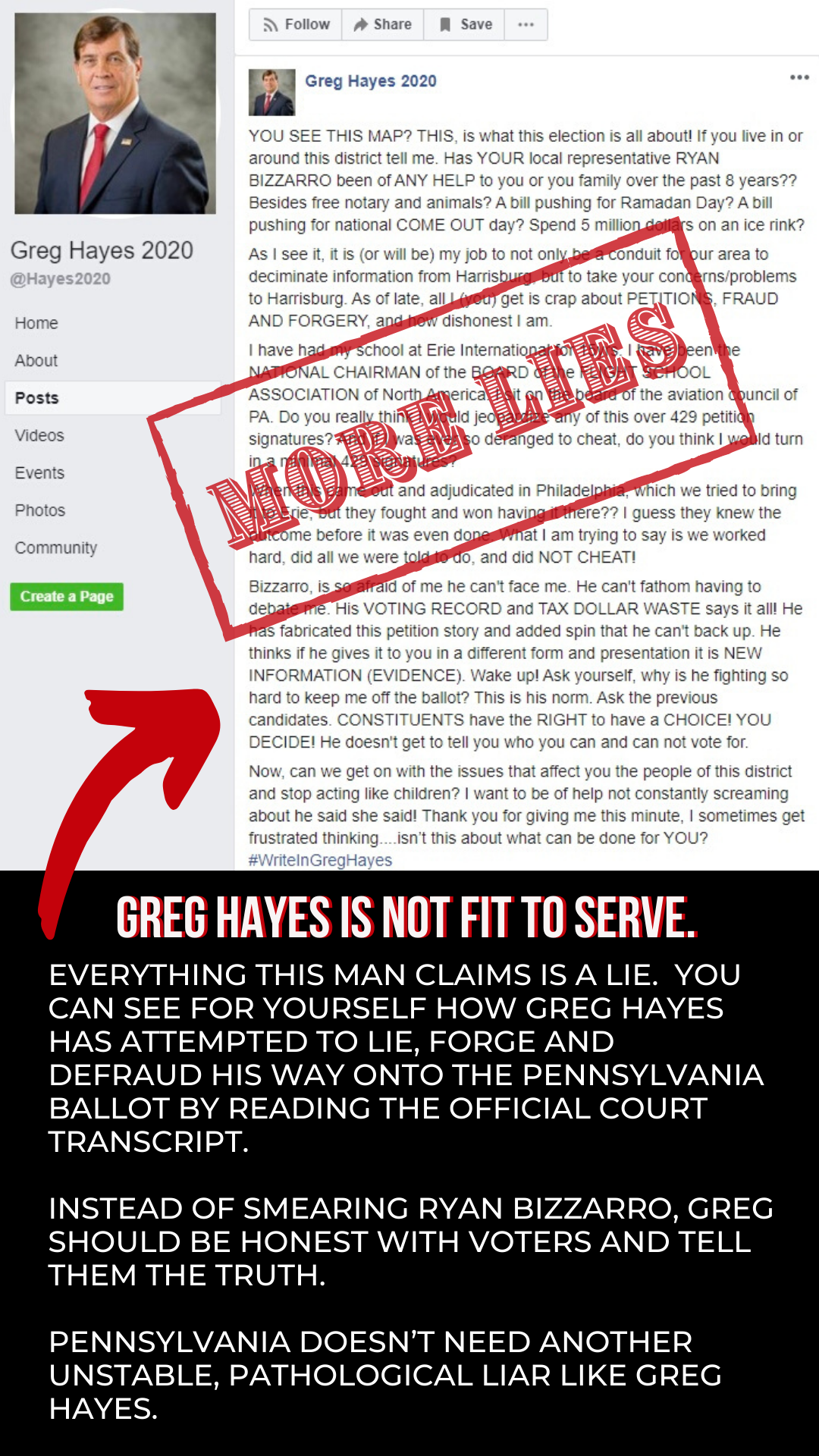 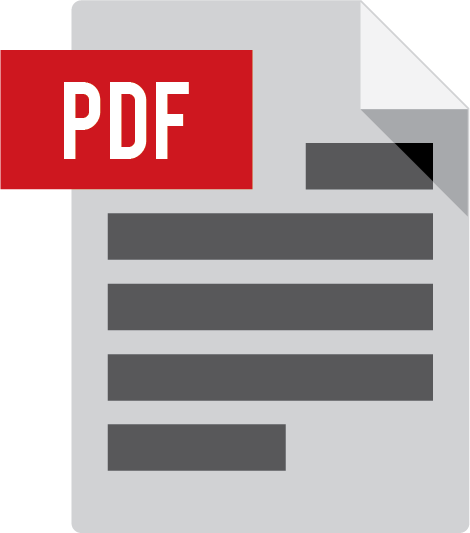 Pre-Court Documents Agreed to by Both Parties

These legal documents are evidence of Hayes' wrongdoing trying to get on the primary ballot.  You can see the FULL court transcript from March 20, 2020 wherein Republican Judge Anne Covey heard arguments in sworn testimony about Hayes' election petitions and ruled to remove him from the ballot due to fraud, forgery and errors.  The second document are his signed petitions, as submitted to the Pennsylvania Department of State, which lists 427 lines of signatures nominating Hayes.  Third is the court documents of fact, stating that of these 427 signatures, nearly 200 were stricken or challenged before consideration by Republican Judge Anne Covey considered the case.  Finally there is a document containing signed affidavits by at least 18 challengers to Hayes' petition, stating that their names were listed on the petitions, but they attest under oath they were not the ones to sign the petition.